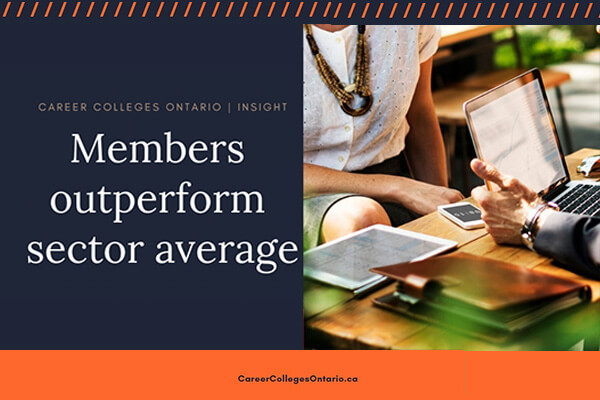 Career Colleges Ontario (CCO) member campuses reported an average OSAP default rate lower than non-member career college campuses in the ministry’s yearly report published this September. The average default rate for the career college sector is 14.5 per cent, according to the Ministry of Training, Colleges and Universities. However, the average default rate is lower for CCO member institutions, 11.7 per cent, while non-member campuses reported an average 15.8 per cent.
Default rates are an important metric for institutions. The rates can have a drastic effect on a campus’ operations, its budget and, if not kept in check, lead to the loss of OSAP designation.
CCO’s board chair, Adrian Sharma, says he’s encouraged but not surprised by the revelation. The association serves as a voice for career colleges and their students in Ontario and consists of over 200 member campuses.
“CCO members have access to a network of experts specializing in all facets of campus operations as well as resources and workshops dedicated to enabling campuses to provide the best quality education,” Sharma said. “Our members are strongly inclined to demonstrate a responsibility for the sector and a commitment to supporting students every step of their journey from the classroom to a career.”
Campuses with a default rate above the ministry-set 20 per cent threshold in the 2017 report are required to post a promissory note and possibly collateral to continue participating in the OSAP program for 2018-2019. Campuses with default rates above the threshold four years in a row will lose their OSAP designation.

This new information comes to light after comparing campus’ membership status with the sector association for the 2014-2015 academic year to data the ministry provided in its 2017 default rate report.

The 2017 default rates, published September 14, relate to the cohort of students who received OSAP loans for the 2014-2015 academic year and have defaulted on their loans as of July of 2017.
CCO published a breakdown of the 2017 career college default rates earlier last month. The breakdown provides a visual representation of the numbers and explores the rates in relation to campus size, location and the public sector.

The 2017 sector default rates are:

Why aren’t rates the same across sectors?