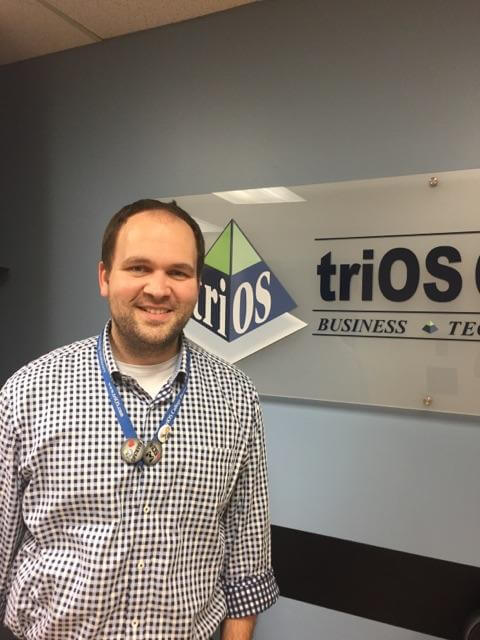 Jeff is a special example of the difference one teacher can make in the lives of his students, the life of a program and the development of the future of his industry.

For six years, Jeff has been an instructor at triOS College’s Hamilton campus, teaching Video Game Design and Development. For context, this is one of the campus’s most demanding programs, requiring students to delve into daunting subjects such as programming and physics. So demanding, in fact, that only a short time ago, Jeff had a class that was struggling with low enrollment and a high dropout rate—at one time even falling to only 2 students within the classroom. But although it became apparent that some of the program’s students had difficulty believing that they had what it takes to succeed in the industry, Jeff had no doubts.

He began to spend his time outside of class, assisting struggling students by providing private tutorial time, often for free. Students found they could confide in Jeff their personal struggles, and together they progressed towards a plan that works.

He also knew that some of his students were struggling financially and were simply hungry. He is always the first instructor to take the extra food from the staff meeting potluck to his students. Often, he spends his own money to treat the students to pizza, samosas, donuts and timbits. And occassionally he would just plainly buys lunch for students who he knew had not eaten that day.

To his students, he quickly became known as “that teacher.” The one who goes above and beyond in their passion for teaching in order to connect with his students in a way most simply cannot. He uses analogies that make sense to his students, and even the most difficult concept is made clear through his lectures.

In an effort to bring the real world to the students, Jeff brought in outside developers of both digital and physical games to have his students included in their testing and quality assurance sessions. The students not only had a blast playing yet-to-be-released games, but received hands-on experience with real entrepreneurs and developers. During these sessions, students were exposed to local professionals in a casual setting, and received invaluable knowledge. The exposure helped to motivate students to excel in their program and made them feel included in the industry even before graduation.

Jeff made great strides to rebuild the student population for the Video Game Design and Development program, and in only a year, it grew from only 2 students to 25.

But Jeff’s passion and spirit of philanthropy are not confined to the classroom. For four years running, Jeff has organized a charity gaming marathon for Extra-Life, an event to raise money for the Children’s Miracle Network (McMaster’s Children’s Hospital, specifically). Collectively, he’s raised approximately $2500 for the hospital.

During these fundraisers, he had his students help organize the work with him, and always included them in the amazing donations they produced. Jeff is the kind of teacher who can teach his program while demonstrating how to be a caring, contributing citizen in your community.